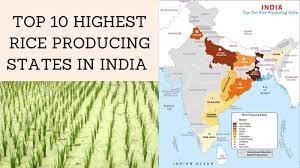 Several of India’s leading rice-producing states have all experienced a good recovery in rice output over the last year, assisting the country in maintaining its position as one of the world’s top rice producers and exporters in 2018.
Over the years, the rice sector in India has been one of the most important contributors to the country’s economic growth, foreign exchange profits, and employment rates. Because of their enormous rice growing area and favorable soil and climate conditions, India’s largest rice producing states are projected to continue to dominate the country’s rice sector.

Two-thirds of India’s basmati rice production is exported. Along with the United Kingdom and the United States, Iran and Saudi Arabia are the largest importers of Indian basmati rice. Currently, West Bengal, Uttar Pradesh, Andhra Pradesh, Punjab, Tamil Nadu, Orissa, Bihar, and Chhattisgarh are home to the majority of India’s leading rice suppliers and exporters. These major rice-producing states account for around 72 percent of total rice-growing area in India and provide more than 75 percent of overall rice production in the country.

West Bengal is India’s largest rice producing state. Rice agriculture covers over half of the region’s arable land, amounting to around 5 million hectares of rice growing area. West Bengal produced more than 15.7 million tonnes of rice in fiscal year 2016, maintaining its position as India’s leading rice producer. These top ten Indian states, along with the other largest rice producing states, are likely to continue producing at world-leading rates in the foreseeable future.

Punjab is India’s third largest rice producing state, producing over 12 million tonnes of rice per year across its 2.8 million hectares of rice farming area. Punjab is also India’s top Basmati rice producer, with over 2 million tonnes of Basmati rice produced each year. Punjab presently accounts for roughly 10% of total rice output in India, and this percentage is expected to grow further as rice cultivating acreage in Punjab continues to expand.

Today, you will have access to thousands of India’s finest rice suppliers. Whether you’re looking for dependable suppliers, top producers, wholesalers, and potential customers in over 70 countries, or you want to know what your competitors are buying and which suppliers they use, It can help you reach out to sales prospects and decision-makers through the largest rice industry networking platform.