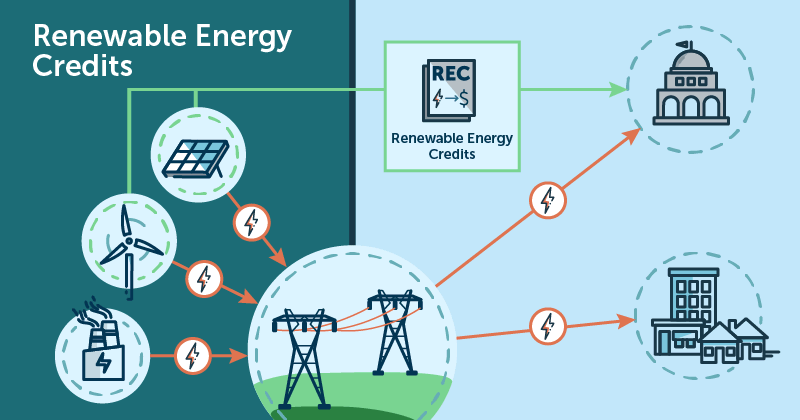 What precisely are renewable energy credits?

Renewable energy credits are marketable, non-tangible commodities that demonstrate that one megawatt-hour (MWh) of electricity was generated from a renewable energy resource and then put into the common system of power lines that transport energy.

What are renewable energy credits?

Electricity enters the system through various sources, including wind and solar energy, as well as natural gas and nuclear power. As a result, it is impossible to determine the actual source of your electricity. You may overcome this problem by purchasing RECs along with your power. RECs are certificates that convey to the owner the “renewable” qualities of renewable energy. In other words, renewable energy credits, when combined with grid electricity, are renewable energy created on your behalf.

The advantages of RECs

Purchasing RECs also benefits the renewable energy market by sending a demand signal to the market, which stimulates additional renewable energy production. As a result, RECs not only assist businesses in meeting their greenhouse gas emission targets, but they also promote the creation of more renewable energy.

If you fulfil the following criteria, RECs are a good fit for you:

The distinction between RECs and SRECs

For every megawatt-hour (MWh) of electricity generated, homeowners and commercial companies receive one SREC. They can then sell these SRECs to power companies. In some markets, an SREC may be worth $300 or more, and a typical 5 kW residential solar system might earn you six SRECs each year.

Who should purchase RECs?

It should be noted that certain businesses are mandated to acquire RECs. Electric utility companies must generate a specific percentage of their power from renewable sources. Renewable Portfolio Standards (RPSs) are rules in several states that set standards for renewable energy consumption. These rules require utilities to produce “renewable credits” as proof that they get a certain percentage of their power from renewable sources.